I must remember to pop in to Rossman again to buy some lightbulbs and, more excitingly, some Marzipan. It is 3am and I’m out of golden paper! 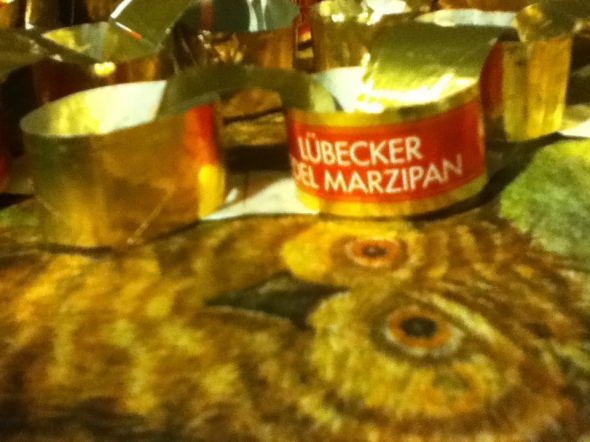 So I made some while talking to my mum on Skype. And some more, in lieu of playing some electronic game.

But this evening I stayed up making garlands for a sadder and angrier reason.

A friend I chatted with told me how a girl she knows (someone I’ve met a couple of times but don’t know well) was a victim of a transphobic bullying earlier this evening. Imagine, this happened at a music event intended to promote tolerance – it was a student gig called ‘Love music, hate homophobia’! What sad irony. Or, rather, what a sad person it is who found it necessary to be such a twat to somebody else. I won’t recall any details, but I hope the bully is banned from the Student union. I also hope they realise some day how wrong they are.

Turns out, I really got angry, because now have no golden paper left. But there is a pretty little garland on my wall which will remind me of the incident, even though I didn’t witness it in person. I just hope that the lovely girl who was bullied didn’t get too upset for too long. But I wouldn’t just like to see no incidents of this kind. Transphobia (and any animosity towards people who are different from yourself) is awful regardless of whether it is direct, or wrapped up in golden paper. Perhaps it is better unwrapped and noticed and talked about. It will take many brave individuals to change this.