Berlin is full of wonders. I’m listening to one right now.
A dreamy long-haired young man was playing his guitar on the Boxhagenerplatz Flohmarkt yesterday, in between the spurts of drizzle. Lost amidst the sea of trinkets, I clutched the coins in my pocket and thought: careful, this music will make everyone want to part with their money. But this was more than a sentimental melody, and more than perfect technique: the music was almost scarily powerful.
I had been wanting to fund some nice guitar music for some time, and this is a lovely discovery.  Dario Chillemi came to Berlin from Sicily. His music plays with genres and defies them at the same time. Each of his four self-produced albums tell a story. Dario’s own compositions (Kamarria) mix classical guitar with wood, water, human voice and other dreamy and mysterious sounds. His newest album A bridge to the past contains a string of pieces that flow as if part of a larger piece, even though they range from Renaissance songs through to Bach and other pre-classical and baroque composers, to traditional African music, to contemporary pieces and experimental compositions by Chillemi and other artists. The cover of the albums, says that his music is like a journey through space and time. I don’t jump on the bandwagon of spiritual journeys very eagerly, but this music can really touch your heart.
http://dariochillemi.com/music/ 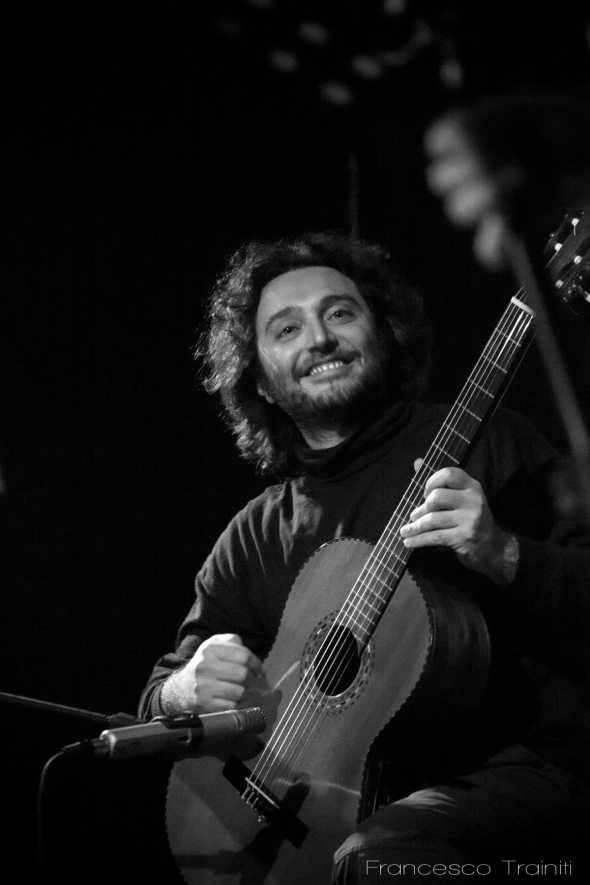 One thought on “Guitarist Dario Chillemi Playing with/in the Rain”